The M-RAC Suppressor Shield mounting system utilizes the two forward most M-LOK® slots on the 3 O’clock and 9 O’clock position of the forend securely lock in the female coupler, which allows for a quick disconnect of the suppressor shield.

This mounting system provides a rock-solid mount for the Suppressor Shield to be centered over the suppressor in a free-float configuration.

Our second generation of Suppressor Shields are designed to be completely free floated over the barrel and suppressor. This accomplished two objectives. First, it reduces the amount of heat transferred from the rifle suppressor to the outer surface of the shield. Two, it allows for a truly zero impact shift when attaching to a rifle. Additionally having zero contact between the suppressor and the shield, reduces hot spots seen on previous generations where the thermal transfer rate was high in certain areas.

The MODTAC M-RAC 2.0 Suppressor Shield is nearly 20% lighter than previous generations, while providing a greater clearance for suppressors, and stronger engaging threads on the coupler.

These improvements only add to the successful design of the original clamp on suppressor shield which has proven to be vastly effective and still very popular around the world.

This design has been tested and reported on by agency after agency and continues to show that about ¼” of air gap surrounding the suppressor allows air to flow in the bottom vents, and out the ends of the shield allowing for nearly 50% reduction in both cool down time and in max outer surface temperature. These lower temperatures will lengthen the life of your suppressor, compared to being kept hot with a fabric style suppressor wrap.

The carbon fiber rigid outer hull is both impact and heat resistant, allowing for a drastic reduction in temperature for hot suppressors up to or exceeding 1000 Degrees F, while being able to take the hard abuse that weapons see on the battle field.

The M-RAC 2.0 is a great option for every day shooters, law enforcement officers, soldiers, operators and government agencies who are using suppressors and see the harsh but inevitable effects of a hot suppressor.

Measure length (A) shown on image above. [Front edge of forearm/rail to end of suppressor]

Note: We recommend the Suppressor Shield be shorter rather than longer than the suppressor if the measurement comes out in between sizes.

Take length (A) and subtract 3/4″ for the total width of the coupler.

For (A) measurements longer than 8.5” please contact us at info@modtac.us 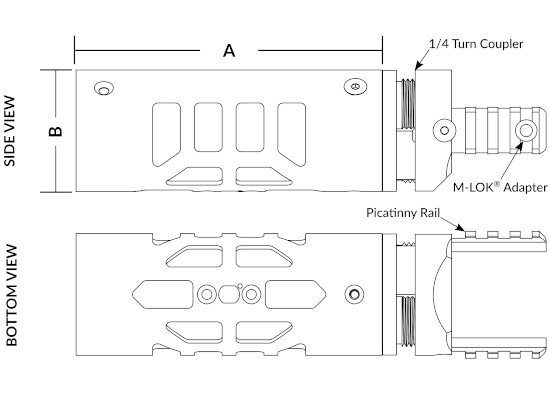 There are no reviews yet.

Only logged in customers who have purchased this product may leave a review.

Add to wishlist
Quick View
Out of stock